A hand-crafted oasis in an upmarket community: Sunday Market at Pondok Indah

Originally written and photographed for the Jakarta Globe. With Cameron Carr.

A celebration of the local community, cars and motorbikes were swapped for stalls and swathes of visitors as two streets in the heart of the suburb were blocked off for the market to take place.

The organisers placed a heavy focus on supporting local business, and it showed through the saturation of local vendors from all fields.

There was never a lull in the action, as live performances rolled on throughout the day. The Indra Aziz Vocal Studio took centre stage in the early afternoon, as its students performed pop hits. All were welcomed with a warm reception, with one performance even sparking an impromptu dance party.

Josh the Magic Man was undoubtedly a highlight, as he drew one of the biggest crowds of the day. The illusionist’s performance began with a trick in which he swapped an Rp. 1.000 bill for Rp. 100.000 – giving the fresh bill to his volunteer. Crowd engagement was central to his show, helping to foster the day’s community element.

“A lot of people both in the Pondok Indah area and outside it are coming together as a little community,” he told the Jakarta Globe after his show.

“I was here last year, just walking around. This year they’ve grown even more, there’s a lot more tenants. And the rain didn’t stop anybody from coming, so that’s good!” 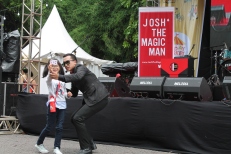 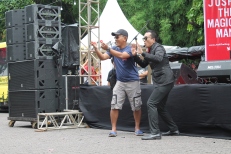 Traditional performances were also a highlight of the market, engaging visitors both young and old. There was a Japanese and Indonesian dance group, followed by a gamelan performance from students of the Jakarta International School. 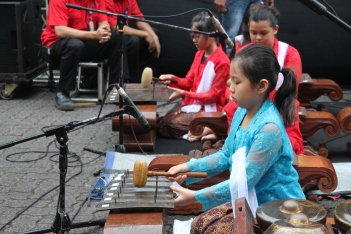 Among the more modern cookware and hot dog stands, the market boasted authentic antiques alongside handmade batik, necklaces and pendants.

Kayu Cendana Gallery vendor Ami uses the market as an opportunity for publicity for his antique wares, as he doesn’t sell anything on the day – rather, he uses the market to start conversations with visitors about his products. Rani, the owner of Manguni Gallery, is thrilled by the local interest in her traditional clothing and jewellery. 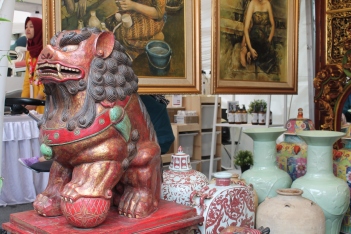 Fira, owner of baked goods stand Lefira, is very pleased with the reception the market is getting. Emad, co-owner of the food truck King of Kebab, says that food trucks are becoming “increasingly popular in Jakarta, as the hipster trend continues.” 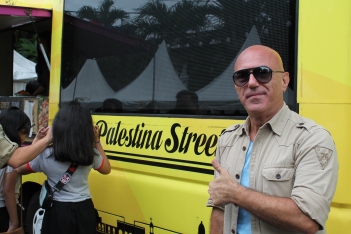 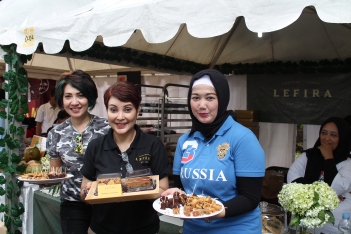 The market was very family oriented, with free activities and play groups for younger children alongside smaller gelato and milkshake stands. However, it also catered to young adults, with food trucks, artisan coffee and affordable products such as vintage clothing and gadgets.

According to local university student Dhita, “it’s a shame there aren’t more community oriented events like this one. Most people here don’t even know their own neighbours.”

The setup was reminiscent of a farmers market, decorated with bunting, white tents and a lush foliage canopy. Centred around communal tables, the event promoted community engagement and socialising.