Melbourne’s first wave pool set to be built in Tullamarine

Australia’s first surf park is landing at Melbourne Airport, with construction scheduled to
begin on the Tullamarine site in late 2016.

Perth-based company Wave Park Group confirmed on April 7 that they had secured a 30-
year lease on the 7.1 hectare site, located approximately 25 minutes from Melbourne’s
CBD.

The $18.5 million wave pool will be approximately twice the size of the MCG, at 320m.
Wave Park Group Founder and Executive Chairman, Andrew Ross, said the park will see a
drastic economic rise in the area.

“URBNSURF Melbourne will generate over 300 jobs during the construction phase,” Mr Ross said. “Another 45 full time positions will be created in the surf park when it opens its
doors.”

“The surf park will inject more than $267 million in gross economic contribution to the
Melbourne region over the project life.” 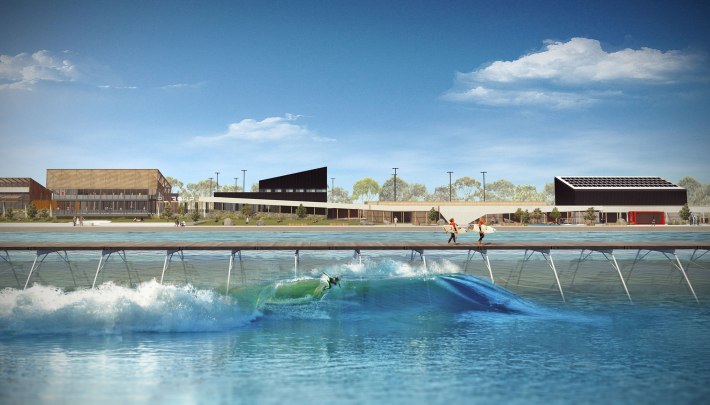 Image from URBNSURF – an artist’s rendering of the proposed pool.

Lyell Strambi, Melbourne Airport Chief Executive, said it will be a great attraction for locals and tourists alike.

“This surf park brings a beach-like experience to Tullamarine, providing a fun, open-air
entertainment facility for the local community and beyond.”

Yet others such as Allan Gerrard, president of the Melbourne Airport Club, haven’t greeted
the news with the same excitement. The not-for-profit club, which is located upon the
proposed site, will have to make way for the development.

“It’s something out of left field. We weren’t expecting that,” Mr Gerrard told the Hume
Leader. “If that’s what they want to do, that’s what they’re going to do … we can’t do much about it.”

By the time we got into contact with the Club, they had already begun the process of
“vacating this site”, and were unavailable for comment.

Taking the Club’s departure into account, Tullamarine resident Jack Franklin, 18, said the
development will benefit the area in the long term.

“It is unfortunate that the Melbourne Airport Club had to leave, especially since they had
been there for such a long time,” Mr Franklin said. “However I believe this attraction is in
the best interest of the area, as it is open to the public and can help the local economy.”

URBNSURF Melbourne is scheduled to open in late 2017.